Have you ever wondered what kind of experiences other drivers commonly have on the road? We did, and we conducted a survey to find out.

Instamotor asked more than 2,000 U.S. drivers of all ages a variety of questions about their driving habits and feelings towards fellow drivers. Some questions we asked were how many hours they get behind the wheel each week, if they consider themselves a good driver, what neighboring vehicles do to annoy them, and if and how they use their phone while driving, to name a few.

Danger On The Road: Male vs. Female 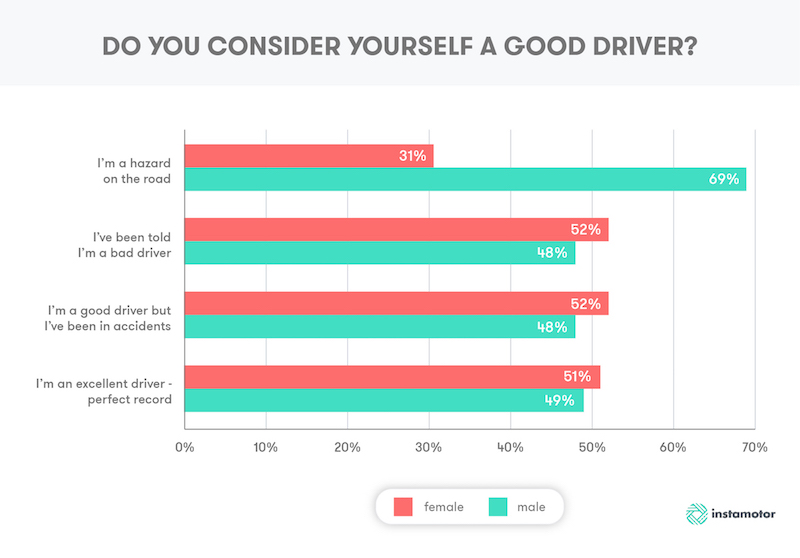 When we asked respondents how good of a driver they think they are, 69% of those who self-identified as being a hazard on the road were male drivers, with only 31% being female. Stereotypes aside, whether the men were trying to show off (speeding, burnouts, etc.) or just being honest, we found the split a surprising one, even though it was substantiated in our article on driving safety in the US. 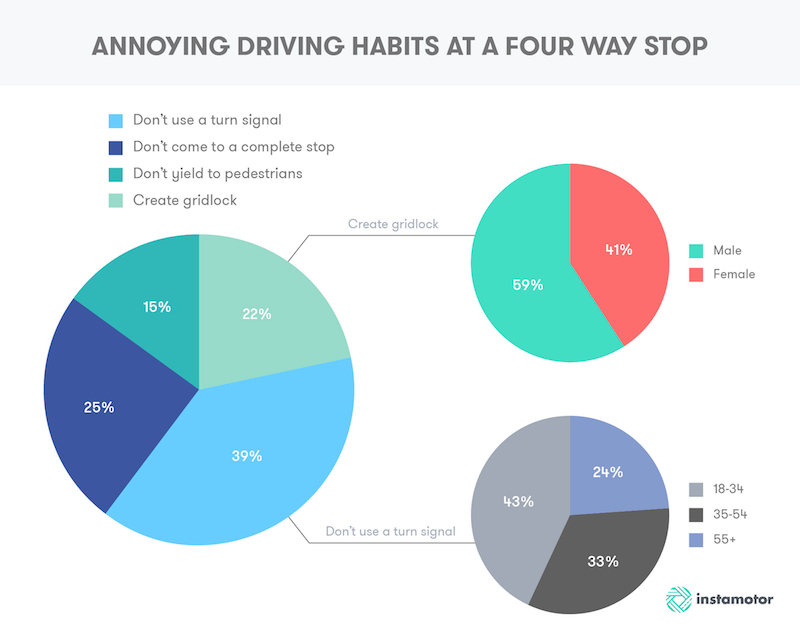 In order to find out what makes drivers most annoyed with other drivers on the road, we asked what irks them when they are at a four way stop. A staggering 39% of respondents said that a neighboring vehicle not using a turn signal at a four way stop annoyed then the most. Of those respondents, 43% were between the ages of 18 and 34 years old. The second most annoying thing a neighboring driver can do is create gridlock.

We also asked what annoys drivers when they are cruising down the highway. More than 27% of respondents said other drivers driving too slowly in the left lane (aka fast lane) bothers them the most.

Which Drivers Are Most Likely To Experience Road Rage? 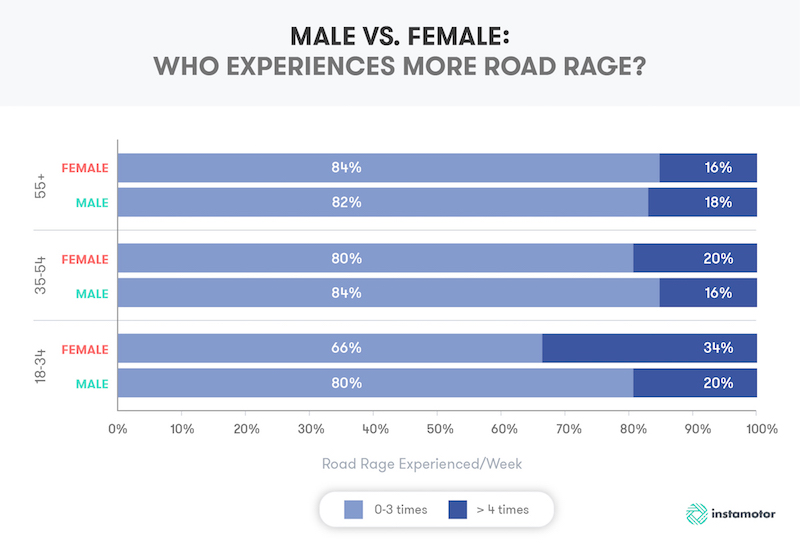 Road rage is a potent force in causing accidents. The National Highway Traffic Safety Administration (NHTSA) reported that 66% of traffic fatalities are caused by road rage, or “aggressive driving”. The agency also said that half of the drivers who receive abuse from other drivers react with matching negative behavior.

Our study found that although men are more likely to consider themselves a danger on the road, women experience road rage more often. Of those who say they experience irritation or road rage more than 4 times a week, 34% were females between the ages of 18 and 34.

Does The Amount Of Time Spent Driving Cause Road Rage? 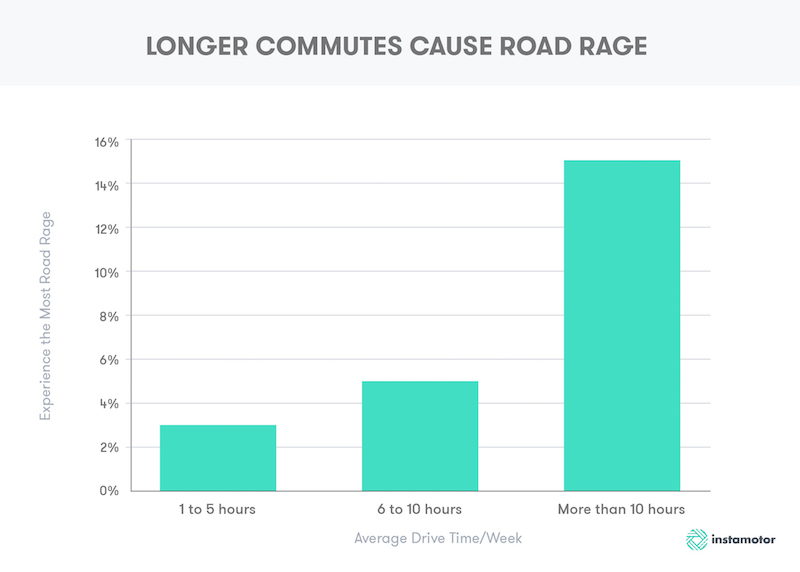 We also found out those who drive more than 10 hours per week on average are almost four times more likely to experience road rage six times or more in that same week. This may be due to the fact that they get more opportunities to be upset with neighboring drivers considering they are on the road more, or that driving longer hours leads to increased irritability. 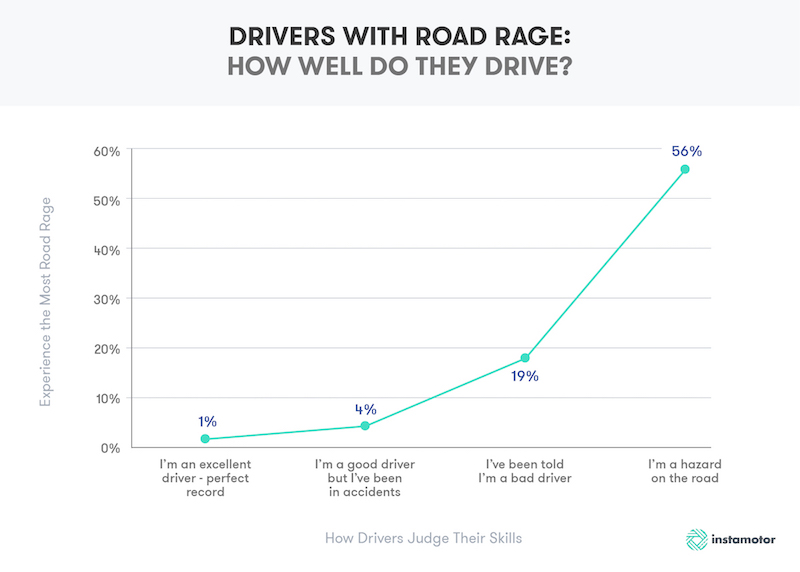 This breeds some scary statistics, as 2% of drivers claim to have tried to run fellow motorists off of the road, according to NHTSA. 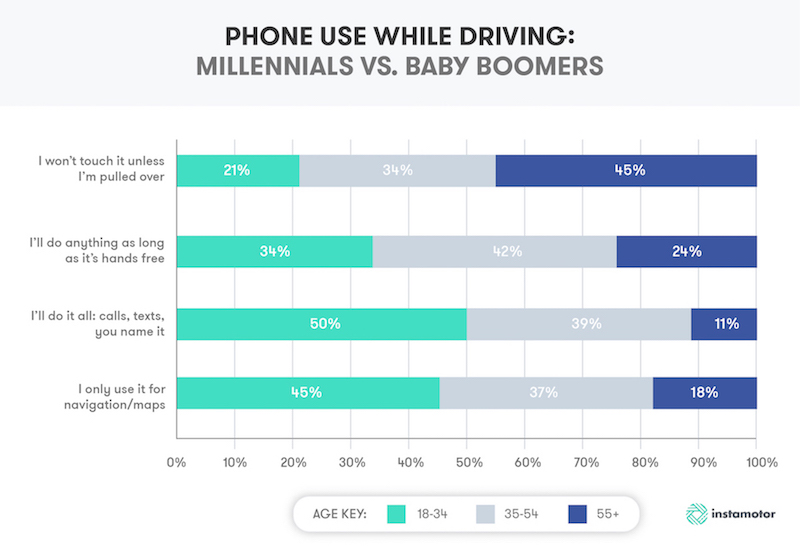 These statistics exist even though California has passed several laws against using electronic devices while behind the wheel. The Wireless Communications Device Law states that no driver may interact in any way with text messages while driving. Drivers who are 18 years and older may operate a hands-free device as long as it is mounted on the windshield and the driver uses only single swipe or tap actions. 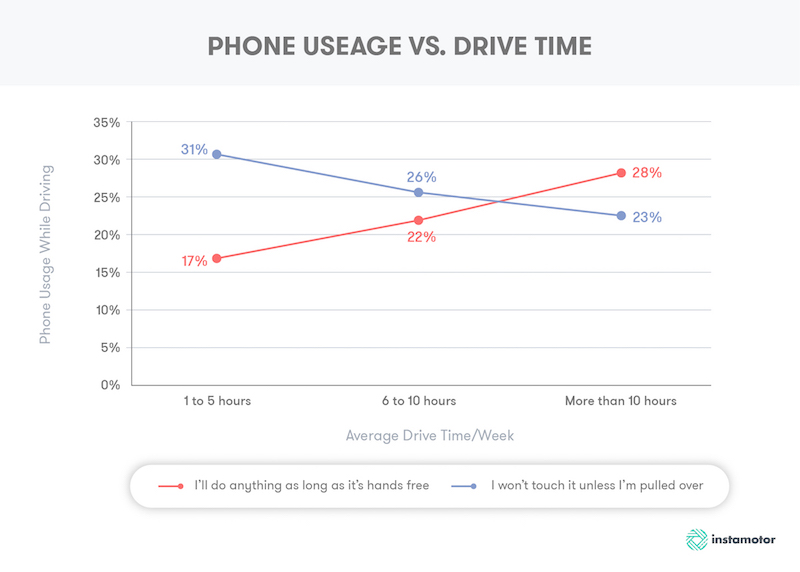 We wanted to understand if there was a correlation of drive time vs. cell phone use while driving. We found that the more hours one drives per week, the more likely they are to use their phone behind the wheel. On the flip side, the drivers who say they won’t touch their phone or use it just for navigation are less likely to use it the more hours they spend on the road.

All in all, we learned a lot about average driver’s habits, where some things defied stereotypes and others defended. Maybe with this information we can better understand our fellow drivers and avoid the pitfalls of road rage and cell phone usage, and ultimately make the road a safer place by being aware of these habits.

Not your typical used car salesman. Our team is here to provide honest and transparent advice about car buying and selling.